Is Your Husband Watching Pornography? You Are Right To Be Worried 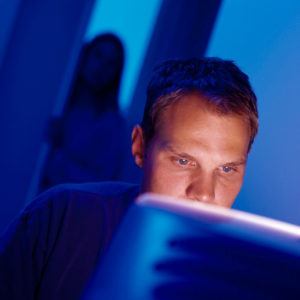 Recently, a lot of women asked for my advice because they have found out (or suspect) that their husband is watching pornographic movies. Some of these women were shocked or horrified, some were confused, and most of them were worried. Their main concern was the possibility that their husband could lose his interest in them because of pornography.

Were their fears justified? After having heard their stories in full, I had to admit that in a few cases, they were absolutely right to be worried. In fact, some of those marriages were already sexless, and the husband’s “dirty habit” was part of the picture.

A good friend of mine and I were having a conversation about pornography some time ago. He was a firm believer in the fact that pornography was lame and that watching these kind of movies caused more harm than good. I remember him saying:

“I don’t understand what people find exciting in pornography. I mean, why would I enjoy watching two (or more) people whom I don’t know personally having unprotected intercourse?”

So, if you ask me, there isn’t a real reason why people (including your husband) watch pornographic movies or other materials. It can be just because it’s in our human nature…

One thing is sure though: compared to the early days, pornography it’s now much more readily available. The amount of adult clips streamed on a daily basis is absolutely insane and the pornography internet market is growing steadily. Most pornography video material these days it’s also in high-definition and offers a huge amount of variety, to meet the diversified tastes and ever-increasing demands of modern consumers. In other words, abusing of pornography these days it’s easier than ever. And as with pretty much everything else in life, abuse is never a good thing…

Your husband watches pornography: when it is a problem

So, when is pornography bad for a marriage or a relationship? Pornography can become a problem in a relationship and, more generally, for a person’s health, if one of the two following things happens:

Usually these two types of behavior overlap and feed into each other, creating a cascade of issues that, obviously, involve both the person involved and their partner. Sometimes the addiction reaches such levels that even the individual’s work and social life can be affected. In this case, it is advisable to consult a therapist as the problem can be particularly serious, and the symptoms are comparable to those of drugs and alcohol addiction.

But how does pornographic material consumption actually reduces your husband’s interest in the intimacy with you? The culprit is a little molecule you might have heard of called dopamine, and the so-called dopamine reward system, a biological mechanism naturally occurring in the brain (check out the video below if you want to know how it works).

Simply put, the problem is that pornography “trains” his brain to react to stimuli that are way different from those involved when having real, live” intercourse with a real woman, in this case you. This happen because the visual stimuli he receives and reacts to when watching pornography are very different from those that he receives when he is in intimacy with you. And I’m not just talking about the difference between how your body looks compared to adult movies actresses’s bodies. I’m talking about the point of view by which he is watching, and how intimacy with you “looks like” compared to pornography itself. As men sexuality is very visual, he will have his brains reward system accustomed to visual stimuli that simply do not happen in bed with you. In fact, it is well known that pornography can be a impotence trigger and libido killer, because of this reason.

How do I deal with this situation? Follow this 6-points guide

In my opinion, pornography isn’t necessarily a bad thing. Pornography in itself shouldn’t be considered controversial or abnormal, and it might be even an healthy habit when not abused of. For adolescents, it could be a great way to get acquainted with sexuality, especially when sexual education fails to address their natural curiosity. For adults, pornography can be a complimentary tool to sexual activity, useful to spice things up in their marriages or relationships. However, both young and not-so-young adults need to be aware of the risks that pornography abuse might have on their sexuality, health and relationships. Free online resources such as Relationshipscope.com were created for this reason.

Want more? I have researched extensively the best online resources that can help you restoring the passion and the intimacy with your husband, and I recommend the one below, as it’s the most effective and comprehensive, and has the highest success rate.