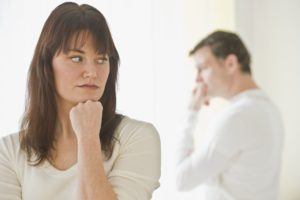 Every couple has arguments and days when they feel like they never want to see each other again. That’s normal for healthy couples who just need to blow off some steam. By the next day, they’ll be over their disagreement and going on with their happy marriage. Other times, however, these arguments can be indicative of major fissures that are forming within the relationship, and these can be serious if they aren’t addressed. There’s a fine line between the two, and you need to be aware when you’ve crossed the line and need to get serious about saving your marriage. So how do you know when your spouse is already thinking about divorce?

One of the most obvious signs he wants a divorce is he might threaten you with it often. Even the happiest couples will argue at times and say things they don’t mean. One of those things may be to bring up the idea of divorce as a tool to upset or anger your spouse to gain the upper hand in the conflict. However, if your husband talks about it often or comments on how fortunate other men are who are going through a divorce, don’t take that lightly. He’s trying to tell you that he’s unhappy in the relationship and chances are very good that if he’s talking about it openly, it’s on his mind a lot.

Another of the signs he wants a divorce can be a bit more subtle. Many men will slowly pull away not only from their wives but their children as well if they’re in an unhappy relationship. You can know that your husband wants a divorce when starts missing nightly meals because he has to work late or he’ll come up with an excuse for why he can’t go on vacation with you and the kids. If you’ve noticed this happening in your marriage, your husband is starting to create distance between him and the rest of the family. Other signs to look out for include:

Related: Why Your Man Loses Interest in You

Related: 5 Ways To Get Your Husband To Have Sex With You

5. He suddenly gives up

You and your husband have been dealing with marital problems for a while, but you are trying to work things out by going to counseling or going on dates to rekindle the flame. After exerting enough effort, your marriage seems to be getting better- at least that’s what you think. Then he suddenly gives up.
He might suddenly refuse to continue counseling, or he doesn’t want to go on a date with you. There might even come a time when he closes his line of communication.

These are some of the major red flags that you need to look into. Although it is hard to accept that divorce is just around the corner, it is best to be prepared than to be caught unaware.

What to Do to Save Your Marriage

I believe that it’s imperative to act quickly, as our chances of rescuing the marriage decrease at every moment that passes without taking action. You need to communicate very openly and to not just ignore what is happening. Many people will just hope that they are wrong and will hope that if they just ignore what they are truly seeing, that this whole thing will just go away. It often will not.

Communication is actually one of the most important keys to a strong marriage. Lay your cards on the table and tell him that you’ve been noticing that the both of you are exhibiting some distance. (By saying “both of you,” it makes it seem like you’re not isolating or accusing him.) You can also ask him something like: “You’re not thinking about divorce, are you?”

Two things might happen. He might just admit it. In this case, you can offer ways that might help to avoid this – like spending more time together, focusing more on things that you both enjoy, and addressing any issues that have are troubling but are being ignored. Sometimes, you will need to offer to give him some space, but it’s best if you can get him to agree to let you stay with friends rather than him leaving.

Often though, he will just deny any thoughts of divorce. If he does, you don’t need to tell him that you don’t believe him or press him. But, you can say that you’ve noticed a difference and a distance and that you want to focus on improving things so that you are both much happier in your marriage and in your lives. You can also tell him what you miss. Often, if you allude to the fact that you miss the intimacy, the closeness, and the laughs, you are painting a much more desirable picture than if you try to argue with him or act negatively.

Want more? I have researched extensively all the e-books and courses online, and I personally recommend the one below, as it’s the most effective and comprehensive and has the best testimonials reviews from wives that have saved their marriage using the method.

How To Get Your Husband Back After He Leaves You

How To Make Your Husband Happy Again